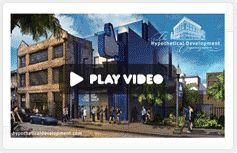 Every building tells a story of its past. But sometimes, with a little prompting, a building can also tell the story of its future. At least that’s what the Hypothetical Development Organization hopes. The group, created in 2010 by author and New York Times Magazine columnist Rob Walker, examines what the future might hold for some of the hidden, and underused, architectural gems in New Orleans by creating renderings of what the buildings could be, you know, hypothetically.

In a city that is still trying to piece itself together after the devastation of Hurricane Katrina in 2005, this is a creative way to draw attention to buildings that are being overlooked. Walker told the Huffington Post that he sees this project as something of a public service.

“If they’re not going to be developed, then let’s have fun with them,” he said. “It’s a pleasure-giving response to this crummy situation with the economy, where development isn’t happening. But this is not mean or depressing — it’s joyous.

July 21, 2020
A Preservation Battle on the Last Frontier

Officials in Seward, Alaska, OK demolition of birthplace of the state flag