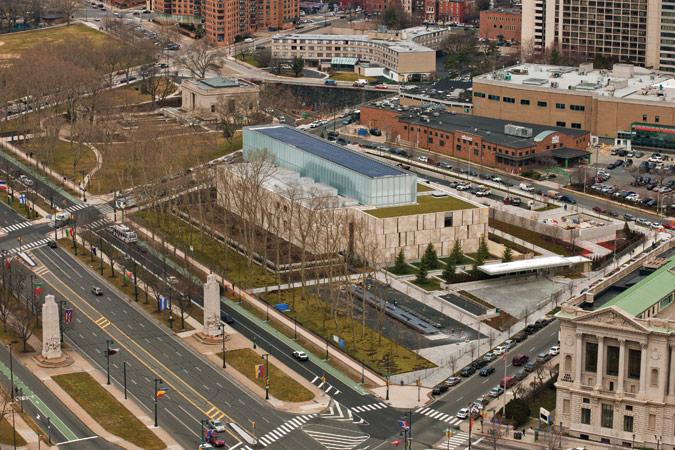 To travel from New York to Philadelphia is to go from urbanity without architecture to architecture without urbanity. New York’s sparkle and spectacle transcend the mediocrity of its architecture collection, in which grim vernaculars are unrelieved by the developer-driven banality of would-be landmarks. Philadelphia’s building stock, pound for pound the country’s best, has to contend with the usual downtown desolations of postindustrial depopulation and bombastic city planning.

The dilemma is acute at the new address of the Barnes Foundation, an unusual art institution now in a skillful new home by Tod Williams Billie Tsien Architects on Benjamin Franklin Parkway. That piece of City Beautiful urban renewal drove a miniature Champs Élysées between the city’s downtown and its Museum of Art (a Schinkel-esque temple on a miniature acropolis), and adorned it with aspirational Beaux Arts institutes, academies, and libraries. But those faded glories are now adrift between unwalkable lots, haphazard highway ramps, bleak alleged parks, lumpen residential towers, and the loading-dock posterior of a Whole Foods supermarket.

The Barnes has its own tortured history. Founded by pharmaceutical magnate Albert Barnes in 1922, it has been wrenched between its status as a private collection and its duty as a civic, if not entirely public, institution. Classicist prodigy Paul Cret (whose masterful little Rodin museum neighbors the new building) designed a villa for Barnes in suburban Merion, PA, to house a collection that would eventually include 7 van Goghs, 46 Picassos, and 181 Renoirs. Barnes’ will, more noblesse than oblige, envisioned limited public access and required that the collection be left in his idiosyncratic hanging, which juxtaposed masterpieces with the work of local artists and artisans to dubious effect.

After financial scrapes and legal twists, the foundation’s trustees found a way to move the collection to Philadelphia’s Museum District, with the stipulation that Barnes’ hanging and Cret’s room layouts had to be exactly replicated.

Those rooms, some 20,000 square feet of them on two levels, now form a bar building facing the parkway, spaced by an atrium from a parallel structure behind, containing administrative offices, temporary galleries, and the main public entrance. Above that atrium are angular lightscoops whose interior geometry recalls a near-identical detail in Williams and Tsien’s C. V. Starr East Asian Library at Berkeley, and whose exterior is expressed as a glassy, floating box—a fancy hat just jarring enough to the comportment below to bring the building into the current century. The replica galleries dutifully duplicate the basics of the Cret originals and their approximate solar orientation, but add coved ceiling profiles for additional daylighting and subtly extend Cret’s plan to accommodate a light well and teaching spaces.

Underground, more classrooms, an auditorium, and a discreet gift shop are lit by that light well, which is planted with hardy ginkos. With a reported $150 million distributed across a total 93,000 square feet, (plus four acres of grounds), the money is there to be seen. The exterior and atrium interior are clad in vast panels of luminous Israeli limestone, whose mottle and hue uncannily match the bark of the parkway’s plane trees. The building’s massing and material evoke its precursors’ classical posture without recourse to formal pedantry. Throughout, there’s a mature version of Williams and Tsien’s characteristic vocabulary of sandblasted concrete, burnished woods, and meticulous metal trim. 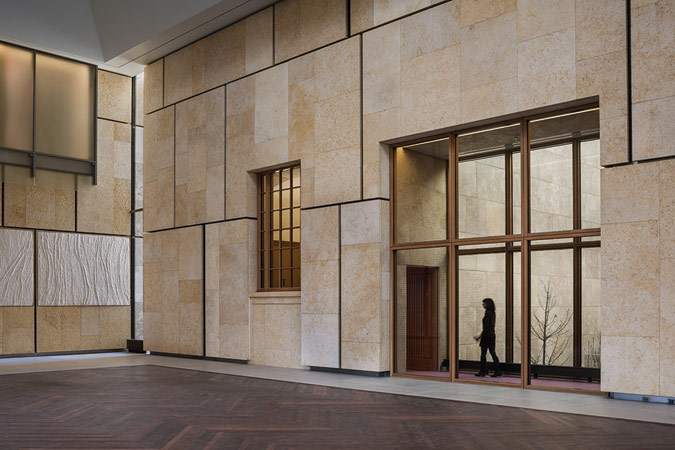 Original Cret details are mixed in with the new building.

What elevates the building above mere good taste is the choreography of the entry sequence. Working with landscape architect Laurie Olin, Williams and Tsien have drawn out the building’s approach: visitors from all directions are filtered through low terraces toward a freestanding ticket pavilion; and from there, along and across a long reflecting pool that sneaks, Barragán-like, under a high wall that abuts a monumental niche, within which they find themselves briefly aligned, through glass and atrium beyond, with the main entrance to the bar building’s replica galleries. (A blunt 10-foot-high wall obscures, in the reflecting glass, the back of that Whole Foods and a parking lot.) But this is no bombastic enfilade: from this moment of axial alignment and anticipation visitors are diverted sideways to the right, through a heavy oak door into a meditative reception room, and thence back to that atrium, an interior forecourt that serves as a holding area from which one enters the replica galleries in timed and spaced groups. It’s an experience that’s intricate yet fluid, intimate yet expansive, staging an essential but delicate delay between city and art.

Charmingly, the atrium floor, in familiar herringbone array, is seasoned ipe wood salvaged from the boardwalk of New York’s own Coney Island. It’s thrilling to contemplate some of Coney’s wised-up glamour, sincere flimflam, and urbane populism seeping deeply into the chilly self-regard and pious propriety to which places like the Barnes can be all too prone: thus Philadelphia and New York, architecture and urbanity, Barnes and Barnum, together at last.