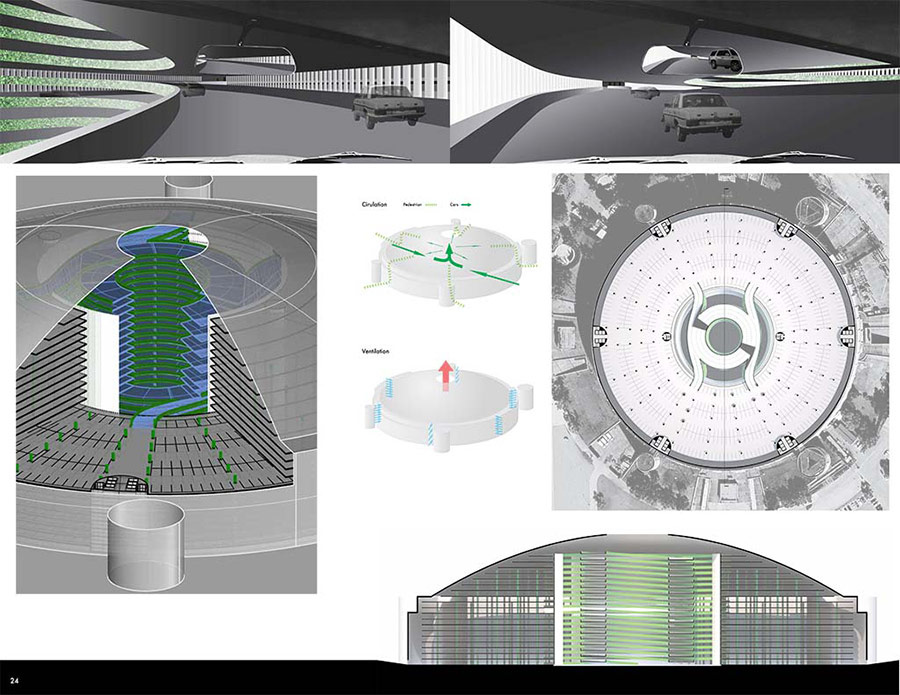 Between when this issue goes to press and when it reaches the hands of readers, the voters of Harris County will have determined the fate of the Houston Astrodome. Either they will have approved a $217 million bond fund to reuse the aging stadium, or they will have consigned it to demolition. When AN and YKK AP decided to host this competition, it was understood that the winning proposals would serve either as a swan song for a doomed architectural icon, or as inspiration for its possible future. The submissions—23 in all—ranged from feasible interventions that imagined a variety of urban, public, or infrastructural uses for the structure, to wildly imaginative and utterly improbable schemes that nevertheless encapsulated the heady spirit that originally propelled this project to completion in the 1960s. The jury, in the end, selected 1st, 2nd, 3rd, and 4th place winners, each of which was chosen for the strength of its concept and the quality of its presentation.

By David Richmond and Adam Wagner

The Astrodome today exists as a functionless, yet iconic architectural relic in Houston. While the interior once provided a shared space for the city, the public now solely experiences the building’s exterior when passing to a football game, convention, or the rodeo in Reliant Park. This proposal inverts interior and exterior programs, bringing a large civil function back within the shell of the dome, preserving the iconic exterior and freeing up the surrounding landscape.

Whether church, hospital, or shopping mall, Houston historically develops the world’s largest hubs for single programs. Along with the Texas Medical Center or Lakewood Church, which represent extremes in scale, the surface parking lot serving Reliant Park has become one of the world’s largest with spaces for 26,000 cars. This number will only grow if the Astrodome is destroyed. This proposal pulls the surrounding environment into the Astrodome, turning the structure into a 13,000-space garage, dramatically reducing the walk from car to stadium and creating a new shared experience for Houstonians.

As with the arena typology, the parking garage must move large amounts of people in and out rapidly and during fluctuating periods of use. To achieve this, two interlocking spiral ramps connecting 18 floors of parking are dropped into the empty center of the Astrodome, each wide enough to allow four lanes of traffic. In this central space, a kinetic experience on a grand scale flickers by as cars speed up and down the ramps, which are encompassed by a ring of vertical louvers that tease small views of the endless rows of parking. Astroturf clads the columns as well as the central ramps in tribute to the Astrodome’s optimistic past. 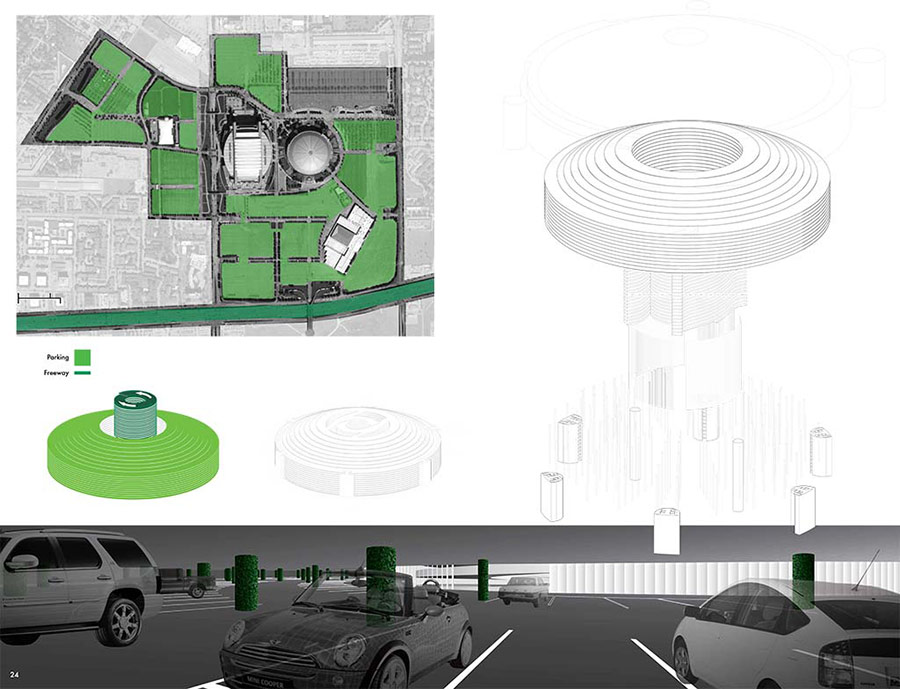 This is a monument to the pain in the ass that parking is in Houston, and a fitting tribute in a city where everything is writ large. While not necessary practical, since parking garages don’t scale up so easily, it uses the formal shape of the dome logically and elegantly, creating a useful program that frees up large amounts of land surrounding the project while completely preserving the exterior. The renderings are well done, the plan and section are mesmerizing (one juror said that they would dream about this proposal in years to come) and the use of Astroturf is fantastic. 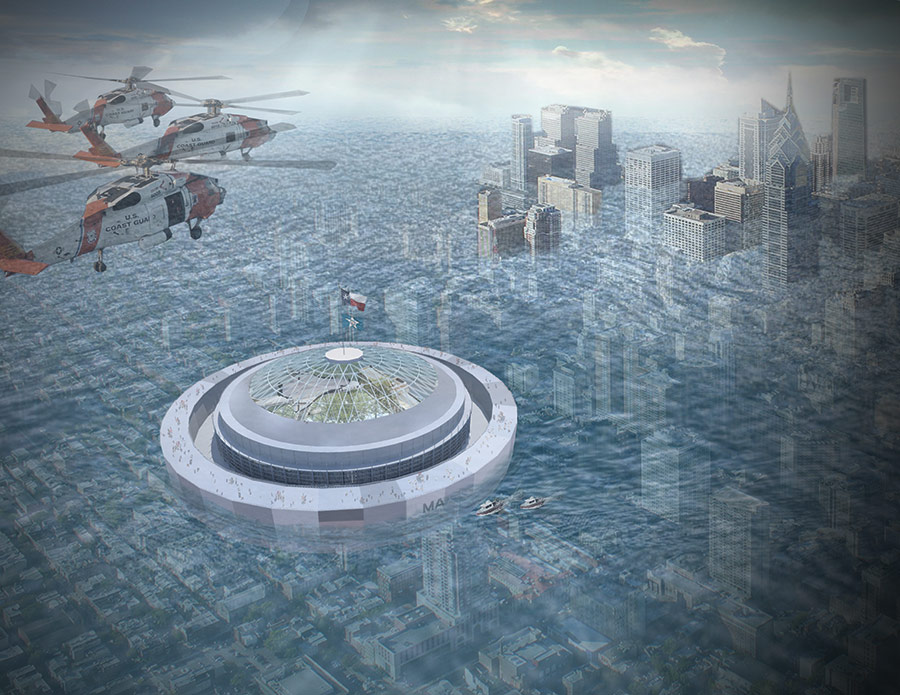 By HiWorks with Erica Goranson

Although scientists had originally predicted it would take a century or more for the seas to rise as high as they did, in the end it all happened much sooner. By 2038, Galveston had been abandoned and the now submerged island was used as the base for the Ike Memorial Dike. Towering over Galveston’s original seawall built 130 years earlier, the new 45-foot-tall structure was intended to hold back the rising Gulf. In the end it merely delayed the inevitable. In 2046, when storm waters from the relatively weak Tropical Storm Rick breached the trillion-dollar structure and surged up the ship channel, Houston knew it had only a few years left to prepare.

Although no one remembered who first proposed the idea, it was a simple enough solution. A steel hull would be fabricated underneath the Astrodome so that when the waters eventually came, the structure would simply float up and away. Stored securely inside the dome were the libraries of Rice and the University of Houston along with the collections of the MFAH and The Menil Collection as well as the specimens of the Museum of Natural Science and the Houston Zoo. The accumulated cultural resources of the once-great city were all moved into the old Harris County Domed Stadium to await the day when the waters came for Houston. 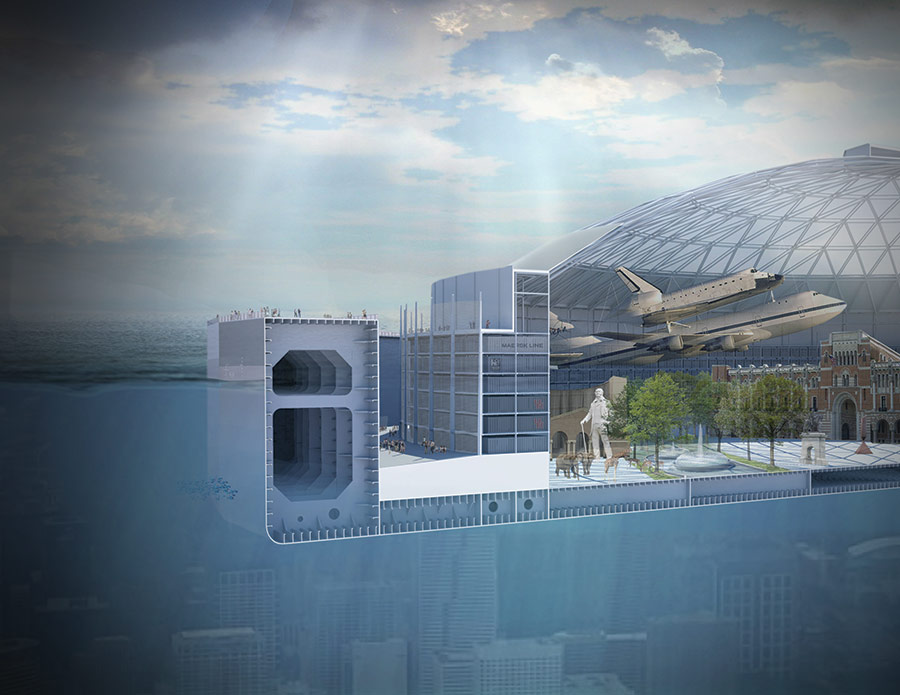 150 years after the sea came for Galveston, it came for Houston. It was not a dramatic surge of a storm that moved the Houston Ark off its moorings. Instead it was the slow and incremental rise of the Gulf. The area around the Astrodome had been inundated for some time, returning the landscape to its native swamp environment. It was on a hot Tuesday morning in November of 2050 when the sensors indicated that the Ark had risen free of its footings. The stabilizing thrusters were activated and the vessel set off on its journey.

It first sailed east, slowly making its way above what had been the I-10 corridor until it met up with both the New Orleans and St. Petersburg Arks, which had been anchored for years above Lake Charles. The three domes spent the next two weeks securing themselves to one another and synchronizing their control systems before sailing over the flooded State of Florida and turning north to meet up with the assembled Arks of the Eastern Seaboard.

The Astrodome as an architectural object was ruined forever when they built Reliant Stadium right next door. One of the best things about this proposal is that it gets the dome away from its neighbor. The scale is spot on. The Astrodome is on the scale of container ships. It also very powerfully addresses preservation issues: Do we really want to save an artifact that has no use or context? Here we see architecture as transportable object, treated like other cultural objects, thrown together and turned into a vehicle for preservation. This also gets best-in-class for rendering, especially the Coast Guard helicopters, and the Texas flag.

Brantley Hightower is the founder and principal of HiWorks architecture. Erica Goranson works for Lake|Flato Architects.

The jury convened on October 4 at The Menil Collection in Houston. AN Southwest Editor Aaron Seward moderated the panel, which included: 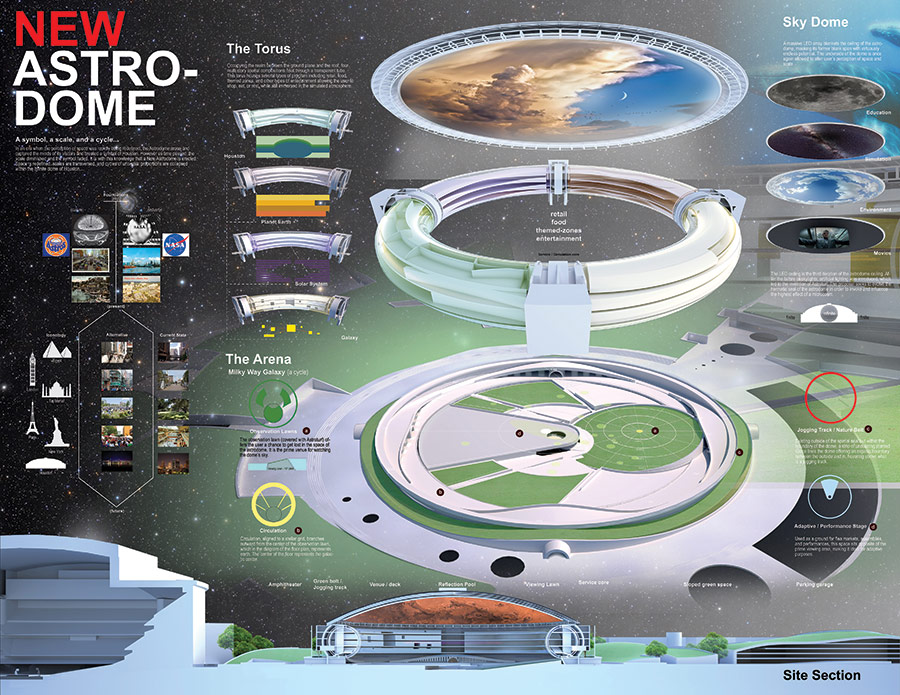 By Cruz Crawford and Elle Kuan

The New Astrodome seeks to establish a simulated reality—one of variable scale, speed, and matter—while at the same time reinvigorating the old astrodomain as a destination in Houston. The proposal embraces Houston’s identity as Space City and is based on themes of outer space, earth, and how they relate to each other in physical space and space-time.

The dome’s ceiling becomes a video surface, allowing for endless variations on the interior environment. From stargazing to swimming with whales, the New Astrodome is a glimpse into all scales of the universe, breaking the notion of a spatial constant. 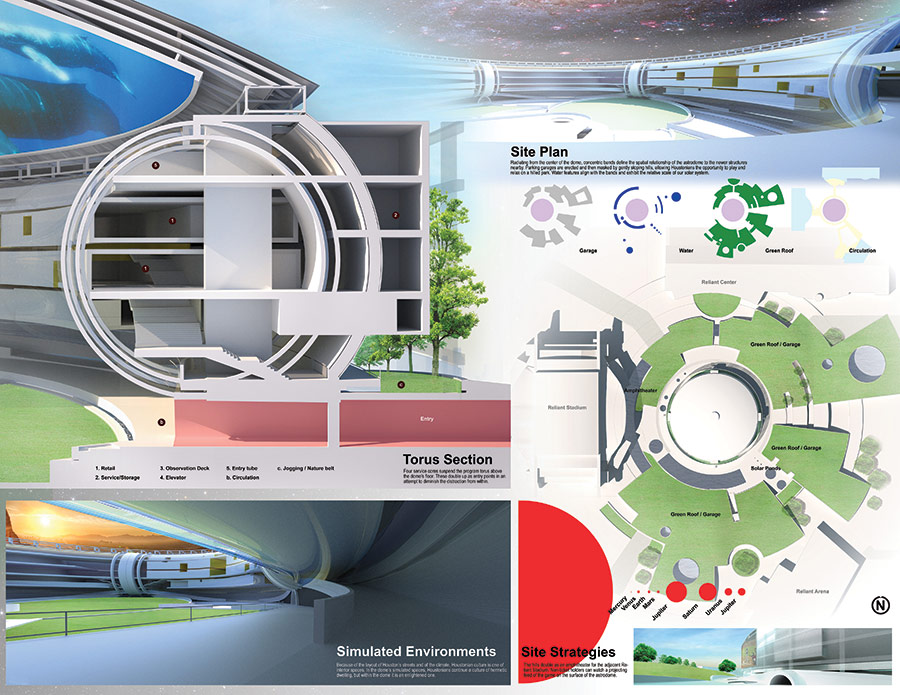 A transparent torus rings the perimeter of the dome. Occupied by various programmatic uses, it is divided into four sections, which symbolize the Milky Way, solar system, earth, and Houston through the use of color and geometric representations. Visitors move through these four sections, experiencing the spatial relationships between each.

After you’ve made the earth artificial, why not make the sky artificial? Astroturf: Astrosky. This is one of the few submissions that made the Astrodome a destination building. It proposes an experience on a grand scale, what a visit to NASA’s Johnson Space Center should be. The torus also excellently reasserts the geometry of the original building. 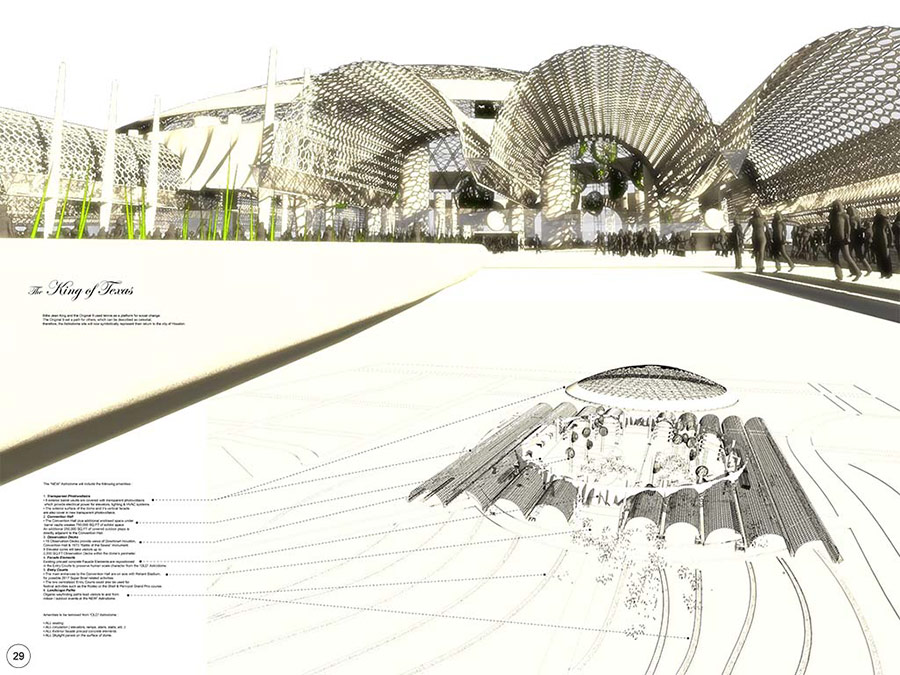 Fourth Place: The King of Texas

On Thursday night September 20, 1973, Billie Jean King rode into the Astrodome like Cleopatra on a crimson-draped litter before a crowd of 30,472, for a $100,000, winner-takes-all tennis match against Bobby Riggs. She rode out the King of Texas.

During the time-span of the Reimagine The Astrodome competition, a very unique anniversary for the Astrodome (09.20.2013) passed without being adequately celebrated. This project physically represents the 40th anniversary of September 20, 1973 as a pivotal moment in earning respect and awareness for gender equality as a universal freedom.

Billie Jean King and the Original 9 used tennis as a platform for social change. The Original 9 set a path for others, which can be described as celestial. Therefore, the Astrodome site will now symbolically represent their return to the city of Houston. 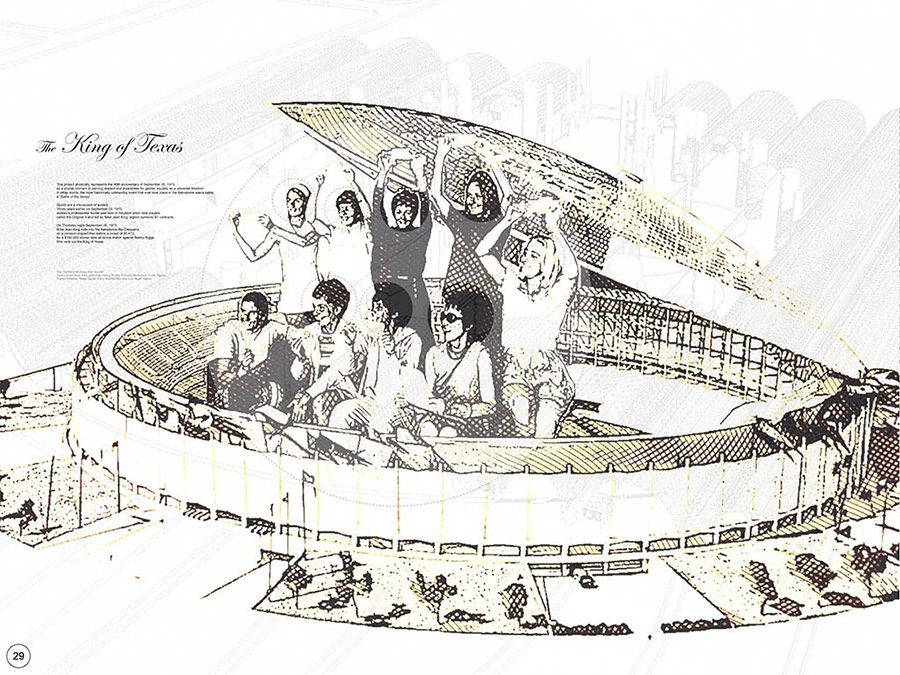 There are so few sites of historical events that have not been demolished in Houston. This is the only proposal that refers to something important that happened in this city. It is the opposite of the Ark of Houston, which looked at the building as a mothballed artifact. It recognizes that architecture is a framework around which things happens, life occurs. In addition, the drawings are beautiful and the boards are carefully composed.

C_UP is a Chicago-based design team made up of S. Hjelte Fumanelli and T. Joseph Surjan.