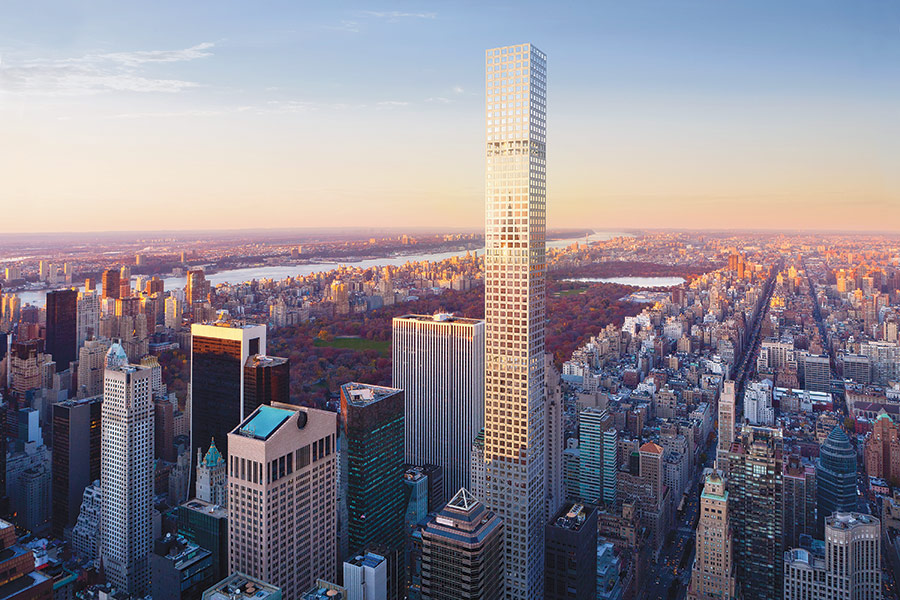 432 Park Avenue will be one of the few high-rises in New York in which structure and expression are one and the same.
Courtesy dbox

Topping out at around 1,396 feet, 432 Park Avenue will be the second loftiest building in Manhattan when it is completed late in 2015. It will not hold this title for long. Already there are taller buildings in development, including the 1,550-foot-tall 215 West 57th Street just around the corner. But even once it is surpassed in height, 432 will stand out among the crowd of super-tall residential buildings in New York City by dint of its unconventional and elegant structural system.

In addition to being very tall, 432 is very slim. Its footprint is 94 feet square. This extremely slender height-to-width ratio created several challenges for Rafael Viñoly, whose studio designed the tower with executive architect SLCE and structural engineering firm WSP USA. For one, the wind vortex acting upon such a spindly structure promised to create a very uncomfortable amount of acceleration in the upper reaches of the tower, unless strong measures were taken to brace against it. And then there was the challenge of devising a structure that would not only keep the residents from becoming sea sick and the water from sloshing around in the toilet bowl, but would also provide efficient and flexible floor plates capable of being reconfigured by apartment owners.

The team began by locating the core in the center of the plan and moving the rest of the structure—all reinforced concrete as is typical of residential construction in New York—to the perimeter, leaving clear span bays of 27 feet. The conventional structural solution for managing lateral forces in this type of construction is to use shear walls, which are wider at the bottom of the building and get narrower up the elevation. This, however, did not suit Viñoly’s goal of providing a maximum of flexibility, since it meant that lower floors would have less access to exterior views than those toward the top. Instead, the team came up with a “basket grid” solution of beams and columns based upon a regular, repeating module that would provide the necessary stiffness and the same permeability across the entire structure.

The dimension for the module that the team came up with is 3-foot-8-inch-wide columns and 3-foot-8-inch-wide spandrel beams, leaving six equal open bays across each face of the building—the basket grid. The depth of the columns ranges from 20 inches at the top of the building to as much as 5 feet 4 inches at the bottom. The floor-to-floor heights are 15 ½ feet with 10-inch-thick slabs, though at the top of the building the slabs are 18 inches thick in order to add more mass to combat acceleration.

Still more had to be done to relieve the wind vortex acting on the structure. Here Viñoly struck upon a particularly ingenious idea: opening the facade at regular intervals and letting the wind simply pass through. Every 12 floors, two levels of the basket grid modules are left empty. Within these open floors are circular enclosures housing mechanicals that serve the six floors above and the six floors below. Breaking up the mechanicals in this way also meant that the architects could keep the ducting at a minimum, preserving valuable saleable square footage. Two large tuned mass dampers at the top of the tower and outriggers in certain of the mechanical floors further contribute to steadying the building.

At 432 Park Avenue, the structure is the facade. The building was literally designed from the inside out. The basket grid of 14,000 psi white Portland cement, cast around preassembled full-floor cages of #20 rebars with steel formwork, filled in with 10-foot-by-10-foot windows, is left without any fascia. It is as simple and elegant an expression of what makes the building work as one could hope to see in a New York City luxury condominium.