Despite pleas for preservation from some of the nation’s top architects, demolition work has begun on  a nationally significant example of “Brutalist” architecture in north America, the 1967 Morris A. Mechanic Theatre in Baltimore, Maryland, designed by the late John M. Johansen.

A  yellow backhoe with a spike-like attachment began chipping into the theater’s concrete exterior earlier this month, ending any chance that the building could be saved. One local preservationist was able to salvage the original letters from the  building, but nothing else. 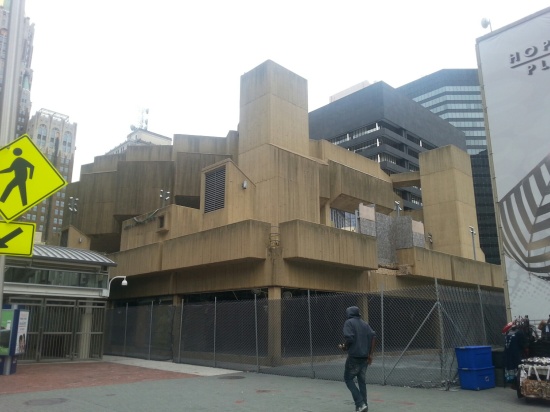 The Mechanic is one of two major Brutalist works by Johansen targeted  for demolition in recent years, along with the 1970 Mummers Theater in Oklahoma City, Oklahoma. Owners of the Baltimore theater, a development group headed by David S. Brown Enterprises, plan to replace it with a high rise containing 476 residences and street level commercial space. Shalom Baranes Associates of Washington is the architect.

Named for local businessman Morris Mechanic, who built it, the 1,600 seat  theater at 1 N. Charles Street was designed to be the sculptural centerpiece of Charles Center, a 33-acre renewal project in downtown Baltimore. When it opened, the theater was hailed as a symbol of the city’s rejuvenation. The building was considered a prime example of  the architectural movement known as “Brutalism” or “New Brutalism,”  because it involved creating an unadorned, free form building with raw concrete — “breton brut” in French.  Johansen, a pioneer in the movement, described the theater as “functional expressionalism,” because the exterior was designed to express what was going on inside

The building received numerous awards and accolades in architectural circles, but it also sparked controversy.  One theater critic, unimpressed with the exposed concrete interior, lamented that going to the Mechanic was like watching performances inside a storm drain. A public official likened its shape to that of a poached egg on toast.  In 2009, it was ranked  Number One on a British publication’s list of the “World’s Top Ten Ugliest Buildings.”

Johansen defended it to the end. “The Mechanic Theatre is one of my favorites,” he said in 2007. “It’s right up there at the top of the list. It’s a dear, dear building. It’s not brutalistic, as some say. It’s like a flower, opening its petals. It has drawing power.” 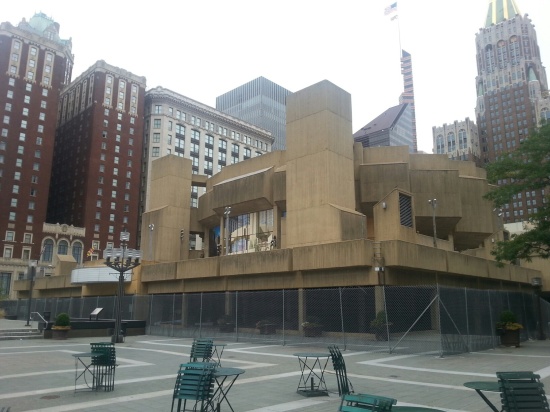 The theater closed in 2004,  after a larger performing arts center opened in the restored 1914 Hippodrome Theater several blocks away, with more seats and backstage facilities designed to accommodate  touring Broadway style shows. The Mechanic was dormant for years, and eventually was acquired by Brown and owners of a parking garage underneath. They initially asked Baranes to prepare a design that retained most of the theater’s shell  as part of a larger development, but opposed efforts to have the theater designated a city landmark — a warning signal to preservationists.

Before he died in 2012 at age 96, Johansen, the last of the “Harvard Five,”  pleaded with Baltimore officials to designate the theater a landmark and not issue a demolition permit. To support his case, he submitted a hand-drawn design showing how the theater could be incorporated into a larger mixed use center. More than a dozen well known architects wrote letters to the city supporting landmark designation,  including Hugh Hardy, Richard Rogers, Richard Meier, Kevin Roche, and James Stewart Polshek, who urged public officials to save the building from “the wrecking ball of greed.”

Baltimore’s Commission for Historical and Architectural Preservation added the Mechanic to a “special list” that offered temporary protection from demolition. But two other civic bodies in Baltimore, the Planning Commission and City Council,  never agreed to add it to the city’s permanent landmark list, which would have given it more protection.  Saying they could find no tenants for the repurposed theater after years of looking, the developers abandoned their initial plans, asked Baranes to design  a mixed use development without the theater on the site, and applied for a demolition permit. They waited out the six month protection period afforded by the preservation panel’s emergency listing and received their demolition permit earlier this year.

“Village in the Park”