The Japanese architect Tadao Ando must be the world’s most reticent architectural celebrity. He doesn’t speak English, rarely gives talks and presentations, and in general lets his work speak for itself. His just-opened Clark Center at The Clark Art Institute in Williamstown, Massachusetts, is one of only a handful of projects he has designed in this country. The new building acts as the main entrance and visitors’ center for the complex.

At a recent press unveiling of the building, the gathered group of journalists fell silent as Ando made his appearance, flanked by colleagues and an interpreter, the quiet interrupted only by the sound of clicking cell phone cameras and a Japanese film crew making a documentary. Dressed in black with a white collar, like a high priest of design, only a faint smile gave a hint that the 72-year-old Ando was affected by all of the attention.

It is no wonder he cuts such a mythical figure. He is a self-taught architect whose body of work is mostly in his native land. At the Clark, he was challenged to bring together a hodgepodge of architecture that includes a rather clumsy neoclassical white marble building from the mid-1950s, the Clark’s original museum, which is joined by a bridge to the Manton Study Center, an equally unappealing modernist building by Pietro Belluschi and The Architects Collaborative (TAC) that opened in 1973. Ando’s own Lunder Center at Stone Hill, completed in 2008, is located up on a hill away from the main campus.

The Clark Visitors Center is a brilliant stroke of architecture that is classically Ando. Made up of glass, concrete, and granite, it seems not so much to occupy the site as to seduce it. His trademark use of raw concrete, metal, and glass is combined with red granite walls that are a nod to the modernist Belluschi/TAC building. The resulting outdoor space is framed on one side by a verdant forest and on another by a large rural pasture. Acting as the mediator within this diverse design assemblage is a one-acre reflecting pool that has three tiers and that recedes as it moves away from the main building and into the countryside beyond. 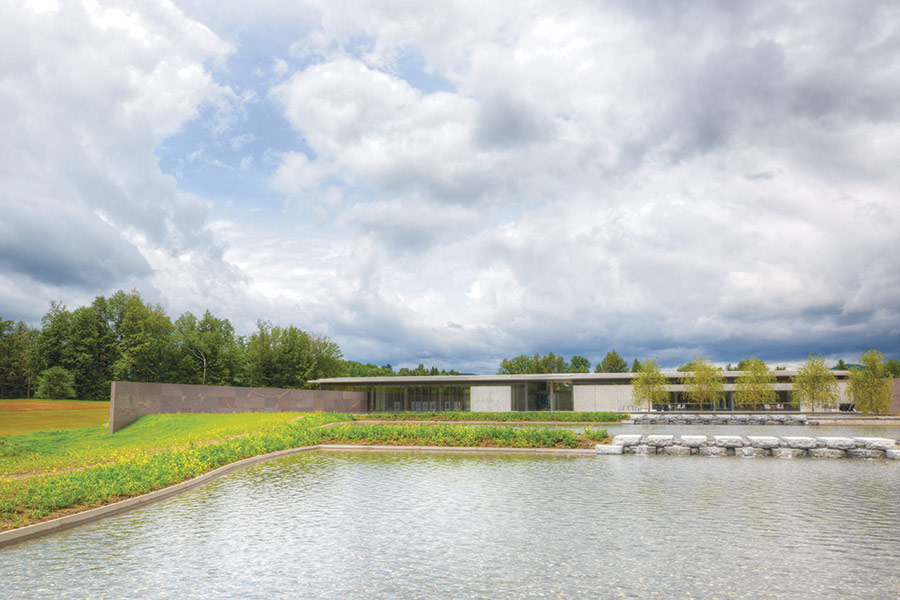 It’s hard to describe Ando’s architecture without using the word “Zen,” so masterfully does he unite building and landscape. The doweled surface of the concrete seems to come alive as it is splashed with sunlight; never perfectly smooth, it is content to recall the best work of Louis Kahn and Le Corbusier. But as one looks at the new pavilion from a distance, with its overhanging roofs and implacable walls, it’s Mies van der Rohe’s Barcelona Pavilion that comes to mind. Neither Ando nor Mies is afraid to let a wall be simply a wall, strong and unforgiving but also gently reflected in water, an ideal backdrop for the display of art. Ando himself has written: “At times, walls manifest a power that borders on the violent. They have the power to divide space, transfigure space, and create new domains. Walls are the most basic elements of architecture, but they can also be the most enriching.”

Ando had numerous collaborators on the Clark project. Gensler’s New York office acted as executive architect and sustainability consultant. Selldorf Architects of New York handled the renovation of the original 1950s museum building and the adjacent Manton Research Center. And Reed Hilderbrand Landscape Architecture of Cambridge, Massachusetts, rightly gets credit for the beautiful and highly functional reflecting pool, which the Clark said is the centerpiece of a “dramatic rethinking” of the institute’s 140 acres of trails and walkways.

It’s easy to mock museum expansions as overly self-aggrandizing exercises and yet more opportunities for rich donors to get their names etched in stone. But given the depth and importance of its collection, it’s clear that the Clark needed more space, and perhaps as equally urgent needed architecture that would give a sense of unity and oneness to the campus.

“The addition of special education space in the new Clark Center, coupled with the renovation of our museum building,” said the Clark’s director Michael Conforti, “enables us to present our collection and expand the provocative exhibitions for which the Clark is noted in new and interesting ways.” As evidenced by his hosting of the press event, Conforti clearly relishes the role of artistic impresario, proud both of the institution’s collection and its new refurbished home.

Ando’s love of details is evident throughout the new building. Note especially the way the white marble pediment of the museum building is visible above the new modernist glass entry pavilion; the way the risers of the Clark Center’s main stairway are angled, giving the impression of a lightening bolt made of concrete; and the way that walls of both concrete and red granite seem to plow aggressively into the country soil, as strong and permanent as Richard Serra sculptures.

So, does this mean that God is really in the details? Despite his sacerdotal persona, Ando is not saying. But surely his new Clark building is a gift, be it secular or divine.