It’s that time again! AN has rounded up another list of the top architecture, design, and art exhibitions open or opening over the next couple of months. The exhibitions below dive into the lives of lesser-known figures in architecture, uncover hidden histories and explore the importance of identity and place.

Check them out below:

Revealing Presence: Women in Architecture at the University of Illinois, 1874-2019

Krannert Art Museum at the University of Illinois at Urbana-Champaign

Mary Louisa Page was the first woman to earn an architecture degree in the United States in 1878 from the University of Illinois—the school offered its first architecture course ten years prior. Revealing Presence showcases the breadth of work that women have contributed to the built environment through a chronological presentation of historical data and images. Spanning the course of 145 years, the show reveals the growing representation of women in the architectural profession over time through the inclusion of a timeline illustrating the increasing number of female faculty and students at the University. Women currently comprise over 40 percent of architecture graduates.

Marc Yankus is a New York-based photographer with over 40 years of experience capturing historic buildings, streetscapes, and abstract compositions found when one looks closely at the built environment. In his sixth solo show at ClampArt, Yankus exhibits a series of photographs that continue his investigation into the buildings of New York City. Through his expert use of Photoshop, the artist removes all of the distractions that come with urban life—traffic, pedestrians, and noise—providing a glimpse into a New York “unseen.” The result is a collection of prominent city buildings seemingly frozen in time.

Housing Density: From Tenements to Towers

On view through December 2019

This new exhibition at the Skyscraper Museum takes a look at the history of residential development in New York City throughout the twentieth century. By examining the approaches to private, public, or publicly-assisted housing, the guest curators Nicholas Dagen Bloom and Matthias Altwicker aim to sort out the different meanings of density over time and how they have shaped the ways residents live in the city today.

Given contemporary debates on infilling NYCHA projects and up-zoning neighborhoods, the exhibition hopes to inform some of these discussions by offering a clear illustration of urban density through historical projects. Some of the projects examined include models of communities such as Tudor City and London Terrace, early NYCHA projects such as the Queensbridge Houses, and large-scale postwar projects such as Stuyvesant Town.

Curated by Stephen Phillips and Axel Schmitzberger, Resident Alien, explores the cultural contributions of Austrian-American architects on modern, postmodern, and digital design culture over the past century. The exhibition is organized into five form-driven categories—Cloud Structures, Aggregate Self-assemblies, Media Atmospheres, Primitive Domains, and Urban Terrestrials—as a way to investigate how bicultural heritage has informed formal, technological, and psychoanalytic architectural discourses. Architects and designers that will be featured include Rudolph Schindler, Victor Gruen, Hans Hollein, Coop Himmelb(l)au, and Frederick Kiesler, among 27 others.

Presented in partnership with Art Production Fund as part of the “Art in Focus” Public Art Program, Lucy Sparrow’s interactive installation is opening at Rockefeller Center this week. The British artist has become well known for her felt art pieces and this exhibition marks the sixth installation in her felt shop series. The installation is set to resemble a New York City “upscale deli” with every item—from chocolate to fruit, cheese and fish—all handmade out of felt. All of the items in the fine food shop will also be available for purchase.

Off the Wall: Harold Mendez

The Raymond and Susan Brochstein Pavilion at Rice University

Rice University’s Public Art series “Off The Wall” has commissioned a series of site-specific installations by recent graduates of the Core Residency Program at the Glassell School of Art. Each installation is scheduled to be on view for a year on the south wall of the Raymond and Susan Brochstein Pavilion, a modern structure designed by Thomas Phifer and Partners. The inaugural artist in the series is Harold Mendez, an artist whose work integrates photography and sculpture as a way to explore identity, place, and geography.

Mendez received his MFA from the University of Illinois at Chicago and has since been exhibited at the Whitney Museum of American Art, MoMA, and the Institute of Contemporary Art Philadelphia, among others. 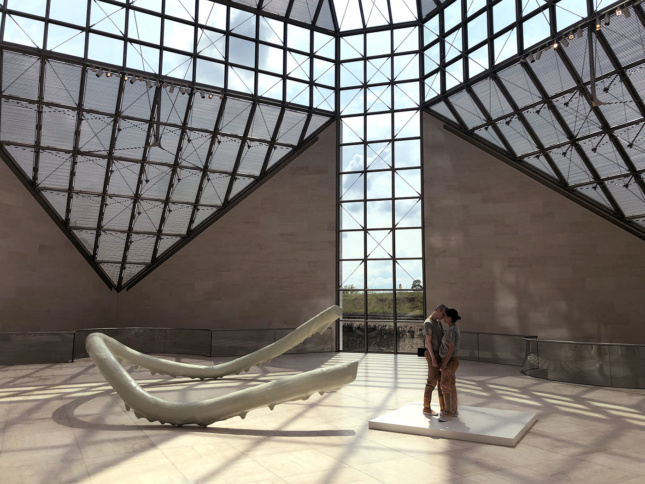 Co-commissioned by Performa and 1013 and co-produced with The Kitchen, this collaboration between artist Nairy Baghramian and choreographer Maria Hassabi will be inhabiting a Fifth Avenue townhouse for five nights this November. The building, originally built in 1906, will serve as the stage for an intimate performance that takes cues from the qualities of the domestic environment. The work aims to “probe the interplay of architecture and gender while teasing out fantasies,” according to The Kitchen.