AN catches up with Peterson Rich Office

Peterson Rich Office (PRO), is a small studio that can seemingly do it all. Hot off of their selection as one of the Architectural League of New York’s 2020 Emerging Voices, AN traveled to PRO’s office in Gowanus, Brooklyn, to chat with founders Miriam Peterson and Nathan Rich about the firm’s multidisciplinary work.

Aside from their elegant interior work (which landed them on last year’s AN Interior Top 50 list), PRO is also making a splash with their light-filled and sensitive conversions (see Galerie Perrotin on the Lower East Side) as well as their studies on reinvigorating decrepit New York City Housing Authority developments. With so much on their plate, we wanted to check in on the eight-year-old studio’s design philosophy, as well as what we can expect from them next. The following interview has been condensed and lightly edited for clarity.

Jonathan Hilburg: How would you describe the firm’s design philosophy?

Nathan Rich: I would say we shoot for what we call specificity. It’s just the term that we’ve latched onto. It means that we don’t have a particular style or a particular material palette, but we try to engage place. We try to engage the things about each project that are unique to that project. And in that process we try to resist trends and style, actually. When we first started working it was around the time of the 2008 financial crisis, and that was a very formative experience, I think, in establishing our philosophy of how architects can create value, and how architects can be valuable.

We saw that professionals can be very quickly and easily affected by markets, and can’t operate as something strictly autonomous, but are instead part of something that’s collaborative—a larger system of  actors working towards the common goal of building something. So with that said, I think we believe in collaboration and we recognize that every project is a little different. And by engaging with clients and collaborators, I think we’re able to create things that are richer and hopefully more valuable.

[Referring to Glossier’s Manhattan flagship store, completed by PRO and interior designers Gachot Studios in 2018] This is a good jumping-off point. What were the challenges in translating a brand that is mainly an online presence into a brick and mortar store? How can you turn something that’s mainly digital into a physical presence?

With Glossier, I think what was really interesting is that they have such a strong culture around the people that use the product, and they’ve really tried and been successful in building a brand that’s about community and sharing, and the way that they actually sell the product is through the staff. They have a team called editors who work with the customers on figuring out what the right products might be for them. It’s meant to be a very community-based experience. So that’s a spatial idea, which in some ways made our job easier because it offers a strong vision for how they wanted the place the function.

I can give you a specific example. At the store, the sinks where customers can try on makeup. These were purposely designed to be able to sit more than one person. So you’re not looking in the mirror by yourself, but rather with a friend or with one of the staff.

That makes sense. Do you want to talk a little about the private Manhattan penthouse PRO is working on? I just want to hear about how that came together, especially the big centerpiece staircase.

With a private residential project, obviously the motivation is very different than it is for retail. The clients brought a lot of their own ideas to the table and were uncompromising in those ideas. 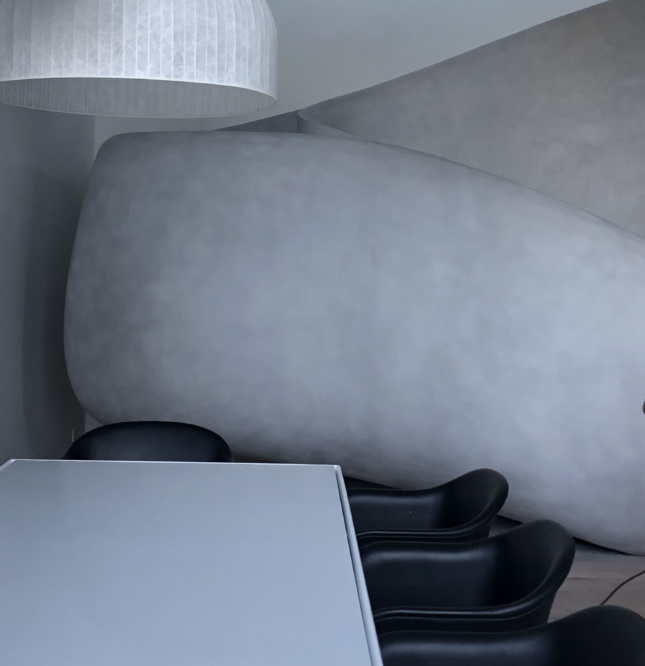 The long, twisting staircase at the heart of PRO’s penthouse project was digitally fabricated and hand-finished. (Courtesy Peterson Rich Office)We worked with them on that staircase, for example, and they had this concept of there being a stairway to nowhere. That apartment has three levels. There’s a lower level, then there’s a second floor of the penthouse, and then there’s a terrace that is up yet another level. When we first started working in that space it was all quite closed off and you really had no sense for that. So our initial goal was structurally to open the place up as much as possible so that you can really experience all three of those levels. The stairway to nowhere was this formal gesture that connected all three of those levels.

We did a series of 3D prints and design studies working really closely with the client. We sent those 3D prints back and forth to their home abroad and that became a part of the design process. And when we finally landed on a form that was structurally feasible and that also felt right, we took the 3D prints and expanded them up to a 5-axis CNC milling process. We were able to mill the form out of high-density foam which wrapped this steel structure. The mass was then finished with a concrete micro-topping to give it the appearance that it has. To the client’s credit, this was not an easy process.

So this ties into your work with Gallery Perrotin, which is by comparison massive at 25,000 square feet. But looking at the photos, there’s still a lot of light and very pleasing forms, like the uplit coffered ceilings.

Perrotin wanted a minimal material palette, and they didn’t want things that would potentially distract from the artworks. But they also had pretty extensive infrastructural demands for how the space needed to function. They have artists that work in many different ways. Everything from traditional painting and sculpture to installation work. One of the first installations in the space was to hang several cars from the ceiling.

Making all of that happen and keeping the space minimal was a real challenge. One of the things we were finding through the design process was that a lot of the infrastructure that was required to make the space function as we needed was at the ceiling. And so, the ceiling had to do a lot of different things, and rather than making it busy or to try to hide all of those things, we decided to try to almost emphasize all of the things through this formal gesture. So the form became a way of partly concealing, but also making the most out of what is a very complex system.

So I’m familiar with your background from our Emerging Voices interview, but do you want to speak to how that also has played into your current design ethos?

Sure. So I worked five years with Steven Holl Architects. And Steven Holl Architects is very interested in phenomenology, and the way that spaces change as you move through them, and also as light moves on them and through them. And so I would say that’s a huge impact on our own work. Miriam worked for Tod Williams and Billie Tsien, who talk a lot about timelessness in their work, and the timeless qualities of certain materials and light. So again, I would say that there are common philosophies and attitudes that have had a strong impact on us.

How much does the firm focus on materiality? I’m interested to hear your approach.

It’s something that we’re trying to get better at, to be honest. And our retail clients, in particular, I think have helped teach us quite a bit about materiality because for them materials are very closely related to identity. Now we’re experimenting with ways to tiptoe more materiality into the cultural projects.

Are you working on anything interesting in particular now that dips into that?

Yes. We’re working on two relevant projects. One is a small university gallery space, and that’ll be a new gallery building adjacent to an historic building with a very strong material identity. So we’re trying to create something contemporary that’s in dialogue with that. And the other is a new gallery and art center in an old church building in Detroit. We’ve been charged with creating a series of gallery spaces, a performance space, and a small library inside the church. The existing church has strong materiality, a lot of form, a lot of articulation and detailing. We’re trying to think a lot about how contemporary architecture can be inserted into that context.

Through a series of inventive projects in Buffalo, Davidson Rafailidis explores its own distinctive take on adaptive reuse