A full-scale replica of one of the oldest timber trusses destroyed during the ruinous April 2019 fire at Notre Dame de Paris cathedral recently concluded a several-week showing at the National Building Museum in Washington, D.C.

As part of an effort organized by educational nonprofit organization Handshouse Studio, the architectural facsimile was produced in strict adherence to plans drafted by French architects Rémi Fromont and Cédric Trentesaux and with support from Charpentiers sans Frontières (Carpenters Without Borders), a nonprofit that unites carpenters from around the world for culturally significant restoration projects.

The 45-foot-wide, 35-foot-tall replica of Notre-Dame’s truss number six was hewn, cut, and assembled by a team of professional timber framers and architecture students and faculty who came together this summer at the Catholic University of America (CUA) in Washington, D.C., for the initial stage of the so-called Notre-Dame de Paris Truss Project.

Kicking off in late July, the ten-day build workshop, which was hosted by CUA’s School of Architecture and Planning and culminated in a truss-raising event on the University Mall in front of the Basilica of the National Shrine of the Immaculate Conception, is the latest in a series of research-based collaborative initiatives, or “dynamic learning environments” per Handshouse Studio cofounder Rick Brown, conducted by the Massachusetts-based nonprofit. Past projects have included constructing replicas of, among other things, a Revolutionary War–era one-man submarine and an 18th-century Polish bell tower.

“What we do is we replicate historic objects as accurately as possible, using the same tools, the same technology, and the same methods as they were originally built,” explained Brown, who, like his wife and Handshouse Studio cofounder, Laura Brown, is a longtime sculpture professor at the Massachusetts College of Art and Design in Boston.

“We bring in professional builders, but then we also bring in students. The students are very excited to get a chance to work with professionals—side by side, shoulder to shoulder—and learn new skills. And at the same time, the builders get a chance to share their skills and their knowledge with young people.”

After establishing an alliance with Charpentiers sans Frontières (which had already embarked on its own truss-replicating effort) and inspiring early enthusiasm by the National Building Museum when it displayed the completed truss, the Handshouse team connected with Tonya Ohnstad, visiting assistant professor and interim associate dean of graduate studies at the School of Architecture and Planning at CUA. In conjunction with the Notre-Dame de Paris Truss Project, Ohnstad led a special course open to CUA students and alumni as well as other interested parties that took a deep dive into both the architecture of the Parisian landmark and the building methods employed in its construction, which began in 1163. Experts from various fields, including medieval history and timber construction, participated in a public lecture series that was part of the course. Per the university, the full curriculum explored “French protocol passed down from the Middle Ages for timber harvesting, fabricating, assembly, tools, and raising techniques.”

With this new knowledge in mind, a team of 70 CUA students and faculty members, timber framers, Handshouse representatives, and others converged on the University Mall to transform Virginia-harvested white oak logs into structural timbers with nary a power tool. The resulting structure was then hand-raised during an August 3 event that included a blessing by Cardinal Wilton Gregory, the archbishop of Washington, D.C.

Following this, the roughly three-story truss was transported and hand-hoisted again on the National Mall for a one-day public exhibition held in cooperation with Preservation Maryland and the National Park Service’s Historic Preservation Training Center.

The truss was then transported, yet again, to the National Building Museum and installed in the soaring (and recently revamped) Great Hall, where it will be on view through September 16.

After its exhibition in D.C., the truss will be bestowed upon France as an “object that serves as a sign of solidarity among carpenters around the world, and a gesture of goodwill,” Brown said. While the truss constructed at CUA and displayed at the National Building Museum will not be used in the reconstruction of the flame-ravaged cathedral, Brown relayed that project architects Fromont and Trentesaux have said it’s “highly likely” that Handshouse will be tapped to replicate a second truss—and that one could play a role in the rebuilding of La Forêt, the world-famous Gothic cathedral’s 25-truss roof structure. 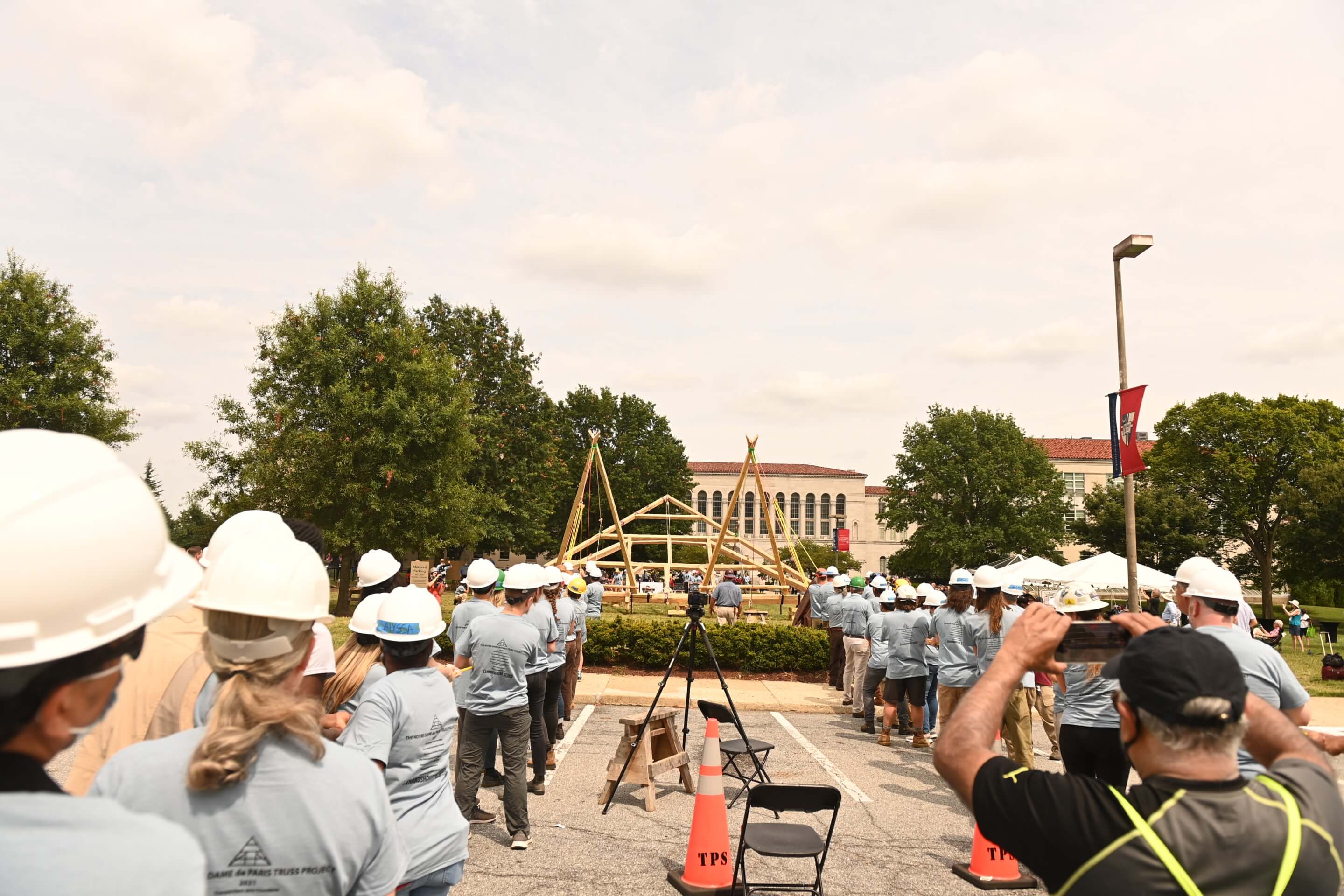 “We don’t know yet,” Brown said of a follow-up truss. “We don’t want to get ahead of the game and do it too soon, because we want to be sure that the next one is the right dimensions. We’re working with them [the reconstruction architects] and we’ll proceed as they advise us.”

Though work on a second truss may not be set in stone, what’s been accomplished to date by the Notre-Dame de Paris Truss Project is, Brown said, “a great success story.”

“So many students have been involved as well as so many professionals and institutions,” he explained. “We’ve also learned so much and exhibited in three high-profile venues—it’s already been a dynamic learning environment come true.”