At the Natural History Museum of Los Angeles County (NHMLAC) an underway expansion project and the formation of two advisory councils promise to deliver an improved cultural destination where visitors can engage with nature- and heritage-related activities as well as admire the first display of a green dinosaur skeleton. Last week, the institution announced its plans for NHM Commons, a new wing and a community hub at the Natural History Museum in Exposition Park will open in 2024, one year after the original planned opening date. 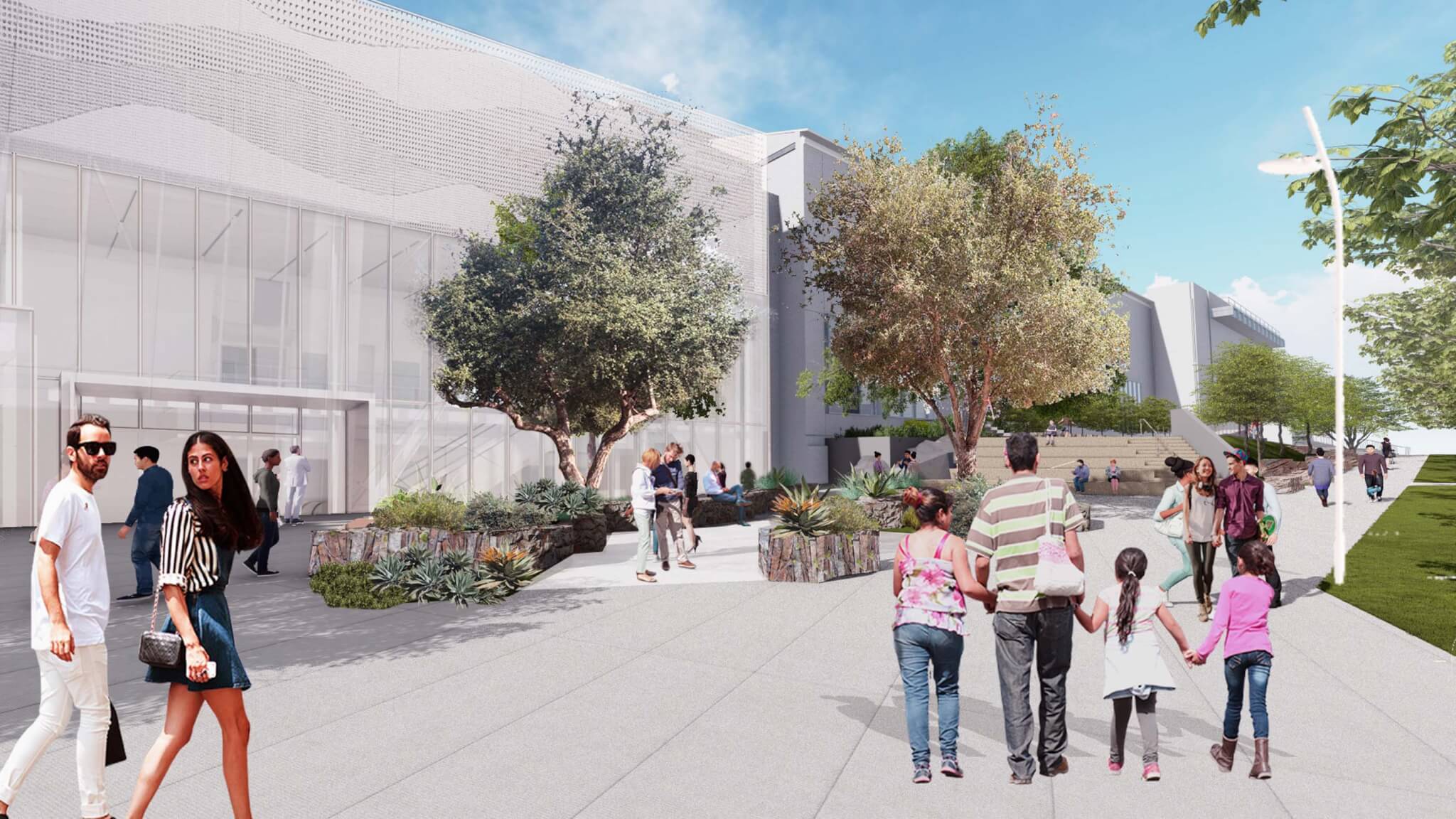 The institution tapped Frederick Fisher and Partners to oversee the architecture of NHM Commons, with Studio MLA working on the landscaping, and Studio Joseph on the exhibition design. As design planning and construction progress on the project, two councils have been established to inform the design, programming, and activation of the site. The NHM Commons Native American Advisory Council, comprised of Indigenous community members and leaders, plus artists and activists, will collaborate with museum staff and the landscape architects to create sustainable gardens that honor the Indigenous land upon which the site is located. On the other hand, the NHM Commons Advisory Coalition will focus its efforts on community engagement and will consider programming to activate the site.

“I am thrilled to announce the creation of two NHM Commons advisory groups consisting of incredible community leaders who have joined us to guide program development for this new wing and beyond,” said NHMLAC President and Director Dr. Lori Bettison-Varga in a statement.

“We envision NHM Commons as a community gathering place, and the collective influence of these councils will help us deliver on that promise. As construction moves forward on the site’s beautiful and inviting new indoor and outdoor spaces, we have been building upon our strategic principle of being museums of, for and with L.A. and shaping an NHM Commons philosophy grounded in co-curation with fellow Angelenos. Our community leaders provide a depth of experience, expertise, and perspectives that guide us toward fulfilling our values and mission.”

The 60,000 square feet of planned exhibition and programming space will comprise several new facilities for the NHMLAC, including a 400-seat theater, cafe, and a new shop. Both indoor and outdoor renovations are part of the project’s purview, on the outside NHM Common’s Community Plaza and Indigenous-informed landscaping. The Community Plaza will be conceived as the museum’s “front porch,” a place for public gathering and programming.

As for the building’s design, the glazing will be replaced with a transparent glass facade that invites the public to peek into the building from the outside park space. Above the ground floor glazing, the low-lying rectangular volume will be topped with a gray face featuring a wave-like pattern.

On the inside, new space will accommodate the installation of Gnatalie, the bones of a Diplodocus-like dinosaur that turned a shade of green during fossilization as a result of celadonite exposure. The mounted display will be the world’s first showcase of a green dinosaur skeleton.

“With its unique green color and imposing size, the 70-foot-long Gnatalie will be a great source of wonder for visitors to NHM. I’m particularly excited knowing that this mount will live in a community space, which reflects the diverse backgrounds of the people involved in the collecting efforts,” said Senior VP, Research & Collections and Gretchen Augustyn Director and Curator, Dinosaur Institute Dr. Luis Chiappe.

NHM Commons will come at a price of $75 million, with the support from the NHMLAC’s Opening New Doors Campaign, a fundraising program that has amassed $100 million for the construction and endowment of the museum.

NHM Commons, is part of a larger reimagining of Exposition Park and the La Brea Tar Pits, a NHMLAC research site and museum in Los Angeles where fossils and bones of animals, including those from the Ice Age, have been unearthed. The park surrounding the tar pits is undergoing a master plan–led refresh by WEISS/MANFREDI. The plan will bring an almost 3,300-foot-long pedestrian walkway around the site and will “reveal the La Brea collection to visitors, bringing the museum to the park, and the park into the public imagination,” according to the firm.