AN has assembled another collection of exhibitions, lectures, and conferences in the coming week that feature artists, architects, policymakers, and thinkers reflecting on aesthetic, social, ecological, and design strategies for the modern world. If you’re in or around New York City, stop by and enrich yourself.

Check out the events below:

Rashid Johnson‘s The Hikers show includes ceramic tile mosaics, collaged paintings, a large-scale bronze sculpture sprouting plants, and an installation of his latest film shot in Colorado, using the combination of mountain landscapes and body movement to express the psychological consequences and challenges of the modern world and its injustices. Johnson asks: “What are the movements like when a black man is walking past a police officer? Or when a black man is suffering from agoraphobia?”

The Urban Thinkers Campus is a UN Habitat framework for critical exchange between stakeholders and partners to promote sustainable urbanization. Columbia University’s Center for Sustainable Urban Development is hosting Accelerating the SDGs in Cities, promoting the Paris Climate Agreement’s Sustainable Development Goals as a tool to evaluate projects on the basis of the 193-nation agreement. Emphasizing the urgency of meeting the UN Sustainable Development Goals, it shepherds academics, professionals, and participants of civil society to generate ideas for action and methodologies to expedite action on the SDGs. The event will also include a complementary gallery of 100 local projects from more than 30 countries, considered according to how they meet the goals. 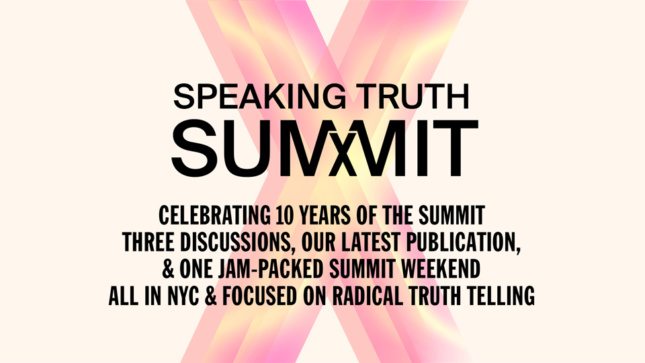 The tenth Creative Time Summit, Speaking Truth, continues the public art organization’s discussion of social, political, and aesthetic questions through keynote presentations, group discussions, workshops, and performances. Traveling to DC, Toronto, and Miami in recent years, it returns to New York City to the Great Hall at Cooper Union and sites around the East Village, asking whether the long-time activist cliche of “speaking truth to power” can rescue us from disillusionment. Maybe not, but some of the usual suspects of socially engaged art will be mixed with new faces to challenge whether art can be more than another sideshow of collapsing civic life, politics, and media culture.

Kéré‘s lecture at Yale promises an update on his recent projects, with an emphasis on his communal approach to design and commitment to sustainable materials and modes of construction, drawing on the social and physical particularities of localities. Based in Berlin, Kéré Architecture’s current work includes the Burkina Faso National Assembly, the Lycée Schorge Secondary School, the Léo Surgical Clinic & Health Centre, the 2017 Serpentine Pavilion, and Xylem, the recently opened pavilion for Tippet Rise Art Center. 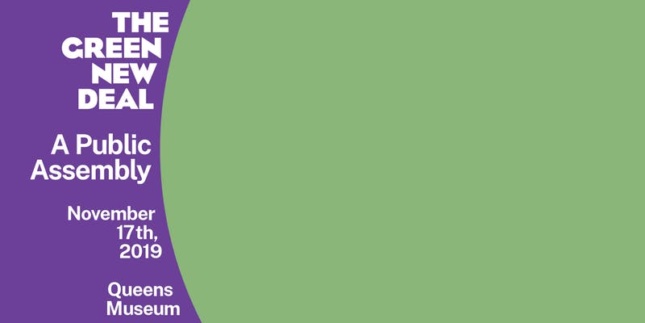 Advocates, organizers, and elected officials—including a rumored appearance by Alexandria Ocasio-Cortez in her district—will gather for this conference jointly organized by the Buell Center at Columbia GSAPP with the Queens Museum, AIA New York, the Architecture Lobby, Francisco J. Casablanca (¿Quién Nos Representa?), and Green New Deal organizer and architect Gabriel Hernández Solano. Following the drafting of a set of general principles for how to equitably redress climate crisis in House Resolution 109 and Senate Resolution 59, The Green New Deal: A Public Assembly includes morning workshops and an afternoon series of discussions to encourage invited guests and the public to think systemically and across scales.

The philosopher Alphonso Lingis lectures on the “irrevocable” at the GIDEST Seminar, the New School’s weekly discussion at the Graduate Institute for Design, Ethnography & Social Thought. Author of a series of books on places of alterity and social cohesion, including The Community of Those Who Have Nothing in Common, The Imperative, Dangerous Emotions, Trust, and Violence and Splendor, Lingis’s work draws from continental philosophy, phenomenology, and engages in philosophical-ethnographic travel meditations, often focused on bodily experience.

Jaque Of All Trades