Neighbors and preservationists sue N.Y.C. Parks Department to save a rare brutalist landscape

After a year and a half of radio silence, a contentious plan to transform the northwest entrance of Brooklyn’s Fort Greene Park is back in the spotlight. Friends of Fort Greene Park, a collection of neighborhood residents and preservationists, and the Sierra Club have brought a lawsuit against the N.Y.C. Parks Department in the New York State Supreme Court over plans to modernize the park and remove a rare landscape intervention from Arthur Edwin (A.E.) Bye, Jr.

Jump back to 2017, when the proposal to build a new grand entrance at the northwestern corner of the park first came before the Landmarks Preservation Commission (LPC). The 30-acre Fort Greene Park was Brooklyn’s first and originally grew out of the military fort from which the neighborhood took its name. The city brought Frederick Law Olmsted and Calvert Vaux on in 1868 to turn the green space into an official park, and the duo cut tight, winding pathways that offered wide views of the planted landscape, similar to their work in Prospect Park and Central Park decades later.

The park has been updated three times since then, but the basic layouts and deference to the Olmsted and Vaux plan have remained consistent throughout. In the early 1900s, McKim, Mead & White cut across the meadow in the park’s northwest corner to improve access to the Prison Ship Martyrs’ Monument, a 150-foot-tall column dedicated to the over-11,500 American prisoners who died on British ships during the Revolutionary War. The monument is reached by climbing a 100-foot-wide granite staircase cut into the side of a hill.

In 1971, landscape architect A.E. Bye was commissioned to accentuate the path from the park’s entrance to the sweeping monument steps using cobblestones and native plants. Bye, who rarely took on public projects, proposed a series of subtle, multipurpose brutalist mounds reminiscent of graves—a reference to the prisoners interred in the crypts below the monument. Bye worked largely through sculpture and drawings to realize his designs, and a pre-Diller Scofidio + Renfro-era Ricardo Scofidio was enlisted to help create a drawing set that the city could build from.

A $10.5 million renovation and a “grand new entrance” to the park would scrap that. The improvements are part of the Parks Department’s Parks Without Borders initiative, which seeks to break down barriers between city parks and the street to create a more inviting landscape. The new scheme would move the park’s entrance to the corner and create a direct route to the monument through the existing circular garden…and Bye’s mounds. Those would be leveled to create a tree-lined “boulevard,” while 58 trees would be removed. The Parks Department claims that the mounds impede ADA accessibility, although the new flattened concrete plaza would terminate at the steps of the monument.

Those changes were unanimously approved by the LPC in November of 2017. Then, on April 1 of this year, Friends of Fort Greene Park, the Sierra Club, and Michael Gruen, president of The City Club of New York and the attorney for Friends, filed a petition (here) with the State Supreme Court over the decision.

The Parks Department claims that of the 52 mature trees it would be removing, 38 are for design purposes and 14 are in failing health. Twenty-eight of those trees are Norway maple, a species that the department classifies as an invasive species with a typical lifespan of 60 years in City parks, and many are at least 50 years old at the time of writing. Additionally, another 31 trees would be removed for a drainage project near the park—13 for design reasons and 18 for their condition. The department states that in keeping with their tree restitution plan, 80 trees would be planted in and around Fort Greene Park.

Additionally, the department states that these improvements, as well as adding a basketball court and expanding the barbecue area, were all researched with input from elected officials, the community board, and the surrounding neighborhood.

Friends of Fort Greene Park disagrees with that assessment, claiming that the department was able to avoid conducting a full environmental review. When the group had previously filed a Freedom of Information Act request over the environmental impact statement, it received a heavily redacted version. Over one-quarter of the 150-page report was blacked out.

“Despite community outcry, the Parks Department is proceeding with plans to cut 58 park trees, and to bulldoze popular landscape features in the historic park,” reads a statement from Friends of Fort Greene Park. “Neighbors had no alternative but to sue the Parks Department, to compel the city to do the required environmental review assessing the impact of the proposed project. Neighbors had earlier brought a successful court action against Parks to release secret documents about the decision to remove mature park trees.

“Despite a court order, Parks has refused to fully comply with the release of documents. Neighbors believe that documents will reveal that Parks had misled city officials about the health of the park trees, creating a false impression that the trees were in poor health when the opposite is true. Fort Greene neighbors commissioned an independent arborist’s report that proved the trees were in excellent health. 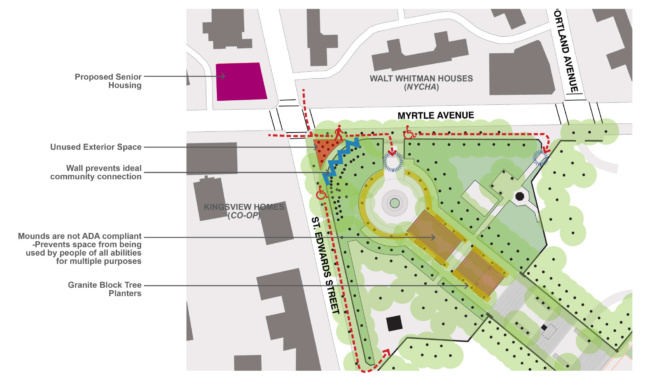 “In addition to removing scores of trees, the Parks Department plan would also demolish a picnic area and rolling landscape mounds that are popular with neighborhood families. In what neighbors see as a scandalous act of social engineering, the Parks plan would relocate the leafy picnic grounds to a new, and more exposed site across the street from an existing NYCHA building, and away from the planned luxury high-rise.”

While the lawsuit is still pending (the first filed at the state level to protect a brutalist structure), Friends has pledged that it will continue to raise awareness of the issue. When reached for a statement, the Parks Department wrote that it doesn’t comment on pending litigation.

AN will follow this story closely as it develops.

SAW weaves a landscape into a multifamily housing development in Sunnyvale, California